The suburban landscape of the United States that is the result of the property boom of before the oil crisis is a strange hybrid of pastoral nostalgia and technological development that has been marked on many occasions by its radically entropic nature. From the world of art, Robert Smithson undertook to explore the landscapes of his childhood in Passaic, New Jersey, revealing their ambiguous temporality, an intermediate state between a ruin and its construction. From the urban landscape, Peter G. Rowe characterized them as intermediate and transition landscapes, coining the term Middle Landscape. 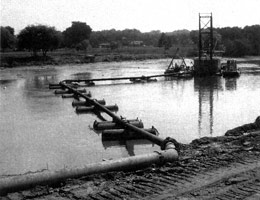 According to Rowe, the apparent absence of attributes of the middle landscape hides one of the most controversial questions for the architectural production of the United States, which was the impossibility of getting the Modern Movement to take root in the North American imagination. The Case Studies of Los Angeles were located like exotic islands within a hegemonic current that proposed radically conservative domestic visions; they wished to avoid the allegedly alienating and cold nature of the architecture of the new objectivity. In cities in the United States, modernity is limited to the higways, shopping malls, and the office complexes. The only remnant of their pragmatism is the Decorated shed of Venturi, which coexists with formalizing homes that were no more than time capsules to transport their inhabitants to an idealized preindustrial past.

It is in the conflict with tradition where the raison d’être of the middle landscape lies: During the 1950s and the 1960s, the advance of the welfare state was manifest in North American homes through the massive irruption of technology, of which its immateriality was exploited in order to allow itself the luxury of continuing to produce domestic products anchored in nostalgia. This was a contradiction that was resolved in the 1970s, when telecommunications finally made possible the dream of linking fiction and reality and work and leisure on the periphery to give rise to a more sophisticated product: The functional mixture of the Master Planned Communities and the rise of New Urbanism meant that the middle landscape was paradoxically charged with renovated entropy.

Peter G. Rowe is an architect and teacher at the Harvard University School of Design, where he has taught urban design since 1985. His main field of research is cultural change associated with modernity and its manifestation in the built-up area of our cities. After investigating the evolution of the post-war North American city as the most sophisticated cultural product of the 20th century, Rowe is now looking for similar keys in his interpretation of how the cultural standards of Western modernity are being reformulated in the urban transformations that are currently taking place in China.