To coincide with its contemporaries of Archizoom, and following a tendency that goes back to the sociological vision of the city of Georg Simmel, for Archigram the metropolis is first and foremost a contagious mental state. For this reason, its project of the instant city explored the possibilities of contaminating the monotonous urban life of smaller cities with the most exciting contemporary urbanity by means of the perceptive activation of their inhabitants: The idea was to use audiovisual devices, leisure installations, and exhibitions, transported in colossal, ludic, and amusing transmitting agents, airships that on alighting on innocent "sleeping towns" transformed their appearance irreversibly, including them in an active metropolitan system, the instant city. 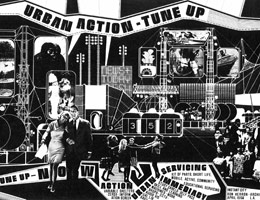 On defining the postindustrial city as a network of information and entertainment, Archigram proposed a novel urban structure, i.e. that arising from the disassociation between hardware, its physical body, and software, i.e. all those activities which, following the Marxist maxim of "everything solid disappears into thin air," can be applied with a spray.

Thanks to the technological and media development, the process of instant metropolization would be propagated in an exponential manner, progressively enriching its meanings, as can be seen in the run through the succession of test fields that Archigram devised starting from south-east England and moving towards the Mediterranean. The original urban project became a suggestive artistic piece on flying over the skies of Kassel, and reinvented itself as an irresistible festive artefact on touching down in Montecarlo.

However, the definitive flight test of the city of Los Angeles was provided by the disheartening vision that Ridley Scott gave of it in Blade Runner, demonstrating the potential of the instant city as a control device. The message ended up transforming the medium, in all its crudeness; the optimistic flight of the airships crossing the skies of the European city bathing it with the light from its lamps, tingeing it with advertising colors, and perfuming it with exotic tongues, became an oppressive threat, and fear darkened the luminous face of the show city.

Peter Cook and David Greene founded Archigram in 1961 with the aim of producing an architectural magazine that finally became the group of reference of fin-de-siècle European architecture. Together with Warren Chalk, Dennis Crompton, Ron Herron, and Mike Webb, Archigram explores new ways of architectural and urban thought that have arisen from the changing condition of the consumer society within which they are generated.