A bicycle wheel will serve to describe this phenomenon. A multitude of infrastructural spokes subject to traction stresses come together towards a territorial hub. The origins of the hub city are eminently pragmatic: A strategic territorial concept that gives importance to the position of intermediate points towards which transport, supply, or information networks come together, responding efficiently to the economic demands of the minimal investment of time and effort. 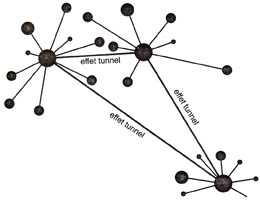 This stable scheme was completely transformed as from the proliferation of high-speed means of transport for people, goods, and information in the 1970s. In the cyclic reference, the strengthening of one of the spokes unbalances the delicate support mechanism; this is a new hierarchical step that unbalances the relationship of the city with its immediate surroundings, giving priority to its connections on an interregional and international scale.

For the decision centers, the distribution platforms, and the human settlements of the global city, proximity to the spokes, to the lines, is no longer important, but rather its proximity to privileged nodes. As a consequence, the hub city continues to grow. Its only challenge is, as it represents urban hardware in its purest state, updating constantly in order to maintain its agility.