The term Doughnut City is used to describe a phenomenon that affects the physical shape of some cities of the North American Sun Belt. It consists of the concentration of urban activity on the ring road (where the newest and most advanced generation of housing estates and office parks are located) and the parallel physical disappearance of all that remains inside (the interior is affected by an accelerated process of obsolescence that leads to the demolition of a multitude of buildings). Viewed from a European perspective, the Doughnut City is a phenomenon that goes against nature. If in the cities of the Old Continent proximity to the center means an added value, in the Doughnut City quite the reverse is true: the most eligible urban areas are on the final periphery. 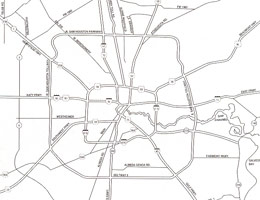 The first casualty of the "doughnut effect" is the historic city center, which was abandoned in the 1960s by a migratory flow of businesses, offices, and homes for the new suburbs that have arisen around the ring roads that were built in the United States in that decade. The next victim would be those very same suburbs that were deserted by the white middle class as new bypasses appeared. On these arose a more modern generation of office parks, residential areas, and shopping centers. History would then repeat itself: the suburbs abandoned on the first ring road would be occupied by emigrants, which would augur the start of a degradation process that would lead to fresh demolitions. The logic of the Doughnut City is therefore expansive: the central gap increases in size as the urban "mass" moves away from the core to the final ring road. 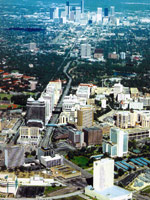 The Doughnut City par excellence is Houston. In the 1960s its downtown area was abandoned in favour of the suburbs that sprung up alongside Loop 610, the city's first ring road (in the late 1970s three times more offices were constructed beyond the downtown area than in it). When Beltway 8 appeared, the white middle class made for the new developments that arose along this second urban ring road. The suburbs abandoned on Loop 610 were occupied by Latinos and Asian emigrants. History is currently repeating itself, in this case with the construction of the Grand Parkway. The new mass of the doughnut forms the Edge Cities, which are already over 40 km from the old historic centre. The central hole is huge: in the late 1980s 38% of the downtown surface area had dematerialised; its buildings had been demolished and the resulting plots of land transformed into car parks.