The term Datatown, inaugurated by the group of Dutch architects MVRDV, is an attempt to sum up the contemporary city in an accumulation of technical data. It responds to the growing process of technification that governs current urban and architectural design. Winy Maas, a member of the group, refers to architecture and urbanism that depend more and more on quantities and infrastructures, and are moving further and further away from artistic discourses. The conformation of this reality leads him to sense that contemporary urban form is no more than the result of the data that make it up, i.e. a Datatown. 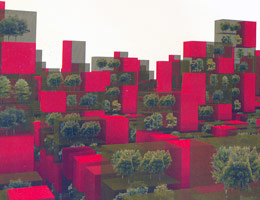 Holland City is a city created from Dutch urban data: 467 cinemas, 226 art galleries, 632 museums - data that MVRDV used to calculate an imaginary city 40 x 40 km long, 25 meters high and with a building suitability of 4.5 m2/m2. In its study for the construction of 750 homes in the Hoornse Kwadrant (Delft, 1992), the argument used by MVRDV also alluded to Datatown. The starting point in this case was the "percentage urbanism," on which were raised most of the European urban plans. 40 m2 of garden per home; 1.2 garage spaces per home; 30 m2 of paving per garage space... in the proposal for the Hoornse Kwadrant all this was transferred into urban form by using constructed strips that assumed a proportional part of the percentages required and that were arranged on a large parking area. 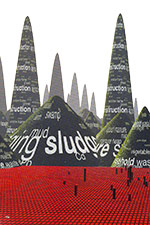 The arguments guiding the urban design of the Datatown are usually quantifiable figures. The concept of FARMAX, "Floor Area Ratio Maxima" or "maximum availability for building," refers to the idea of radicalizing this condition by concentrating construction in certain areas. This would release the remainder of the metropolitan territory from urban pressures. The studies carried out by the MVRDV on the Hong Kong Kowloon, probably the densest urban area on the planet, and its application to the densification proposals of the urban centers of Rotterdam and Amsterdam, respond to this idea. The concept of FARMAX was also used in the urbanization project for the IJ canal area (1994), the last empty space available in Amsterdam, where 18,000 homes will be constructed and the greatest possible space will be preserved.