The concept of Centripetal City arose from the questions expressed by the lecturer Albert Pope of the Rice University of Houston regarding the strictly expansive character of contemporary urban phenomena. In order to do so, Pope takes as a starting point the mesh of the New York Commissioners' Plan referring to the North American town planning of the 19th and 20th centuries, and describes it as an essentially centrifugal, open, and democratic spatial organization, which at the same time annuls differences and suppresses hierarchies under its implacable crusher. 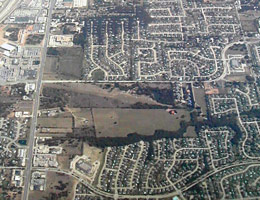 According to Pope, the expansive dynamism of the network finds a point of reflection that coincides with the violent outbreak of the fear of freedom of modern man during the Second World War. The homogenizing character of the mesh begins to be interpreted negatively, and the praise on its opening is giving way to an unconscious feeling of agoraphobia. Taking this feeling into account, the acceleration of the process of compartmentalization and the closing in of the urban space during the post-war period, defended since the late 19th century by theorists such as Ebenezer Howard and Patrick Geddes, gave rise to what Pope calls the post-war urban implosion epitomized by Ludwig Hilberseimer in his writings on the New City (1944).

The rupture of the mesh gives rise to a radically closed and centripetal structure, which Pope describes as a ladder and which questioned the supposed univocal relationship between the spatial transparency of the Modern Movement and the open organization of its cities. Using the ladder concept, and studying the jealous vindication of the beauty of life within a community compared with the perversion of life in society, Pope registers the last echoes of implosion in the radicalization of social segregation in the United States through urban utopias that are nowadays appearing on the horizon of the European city. The CIDs (Common Interest Developments) are shared-interest communities, utopias of equals, microstates within a state whose success lies in its inhabitants renouncing freedom voluntarily in exchange for security compared with the chaos with which the metropolis is identified. After ten centuries, in the centripetal city the "Stadtluft macht frei" ("the air of the city makes you free") which welcomed visitors to Lübeck was added to with the words "Provided that you pay for it" in small letters.

Albert Pope is a lecturer in Urban Theory and Design at the Rice University School for Architecture in Houston. The author of numerous articles that study the implications of post-war urban development in his country, he is currently researching the phenomenological impact of urban infrastructures in the construction of a contemporary subjectivity.