Villa Miseria is the Argentinian version of a term that has numerous local equivalents: Favela in Brazil, callampa in Chile, pueblo joven in Peru, katchi abadi in Pakistan, shanty town in Kenya, bidonville in Algeria, township in South Africa, barong-barong in the Philippines, jhuggi in India, etc. All of them refer to the same phenomenon, the slum housing that surrounds the large metropolises of developing countries. The Villas Miseria are unplanned settlements. They appear as a result of the initiative of a group of citizens (normally from rural areas) who appropriate furtively and illegally an empty territory located on the periphery of a large city. 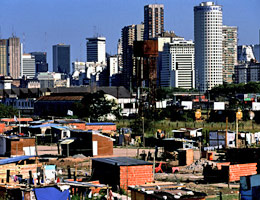 Normally these lands are publicly owned, of unknown ownership, or have an absent landowner. The Villas Miseria are made up of homes constructed by their occupants, normally with discarded material. The result is an informal high-density city that grows as long as there is space for it to do so. They generally lack even the most basic services (water supply, electricity, sewage, refuse collection...), and also shops and public services. 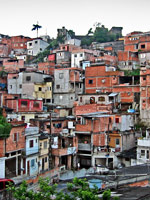 With the passage of time the Villas Miseria tend to improve. The residents organize themselves into groups that operate as public institutions to supplant state ones and establish rules of their own, recognizing acquired rights, resolving disputes. The homes become consolidated thanks to the replacement of the discarded materials with others that last longer. Initially the public authorities tend to tolerate the situation because of their incapacity of responding to the housing needs of the population of the Villas Miseria. Finally, when the latter have achieved a high degree of consolidation, they finally proceed to provide infrastructures.

The numerous versions of the concept of Villas Miseria demonstrate the world magnitude of the phenomenon of urban poverty, one of the most visible expressions of which is substandard housing. The high rates of population growth of developing countries (normally between 2 and 4% per year), to which must be added the continuous country-city migration, have a lot to do with this. The consequence is that of the ten most populated cities on the planet (Tokyo, Sao Paulo, New York, Mexico City, Shanghai, Bombay, Los Angeles, Buenos Aires, Seoul, and Peking), currently only three belong to the First World, and by 2015 only six of the thirty-three most populated will be in this category. In all of them around 50% of the population live in Villas Miseria (32% in Sao Paulo, 40% in Mexico City, 47% in Manila, 59% in Bogotá, and five million people in Bombay).