The appearance of sub-centers throughout history has been described as the clearest spatial manifestation of the progressive disassociation of activities and powers in the city that is inseparable from the development of civilization. However, the phenomenon of polycentrism includes a distinguishing fact, associated with a jump in scale by means of which the city exceeds its critical mass, which historians locate for the first time in Imperial Rome when the capital reached the mythical figure of one million inhabitants. It would not be until the 19th century when Ebenezer Howard proposed overcoming the problem of the risky nature of this behavior by taking advantage of it by means of its arrangement: the Garden City was nothing but a metropolitan city articulated through several centers, the coordinated operation of which served as the basis for an economic and planning strategy that allowed the promoting of the rational construction of the modern metropolis. 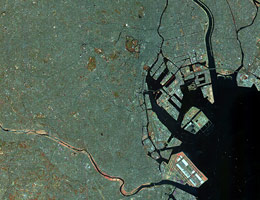 The contemporary polycentric city transcends what is urban to include territory, combining spontaneity and organization in equal measure in order to shape a kind of immense body without organs, under the skin of which hidden rules can however be deciphered that regulate an order adapted to the logic of advanced capitalism. The proliferation of cities within the city pursues the shaping of a scenario in which its competitive cooperation (the coopetition divulged among others by Koolhaas) on an economic, social, and environmental level is articulated by means of powerful transport systems and efficient communication networks.

This phenomenon occurs all over the world; its purest state can be found in the explosive growth of Asian cities during the last decade of the 20th century, especially in its paradigmatic example, the megalopolis of Tokyo: A body apparently without logic, in which a powerful rail infrastructure has served as a spur to economic growth and the urban development of the city, giving free rein to the proliferation of centers according to a logic explainable by resorting to the sciences of chaos. The Yamanote Line constitutes a strange attraction around which gravitate islands of effervescent activity such as Tokyo, Ueno, Ikebukuro, Shinjuku, and Shibuya, in the midst of an apathetic suburban sea to which the immense void of the Imperial palace serves as a vortex, without being more than an inert and swollen heart.