Paul Virilio gave the name of Overexposed City to a radically intense and dynamic city, the aspect of which is being continually reconstructed by electronic screens. With this he alludes to one of his favourite themes: the dematerialization of the city induced by the impact of information technologies. According to Virilio, these technologies have altered the perception of time by human beings. Chronological and historical time has given way to the real time of the computer screen and the television set, where everything appears instantaneously. Real time annuls the notion of physical distance, as the faster we move around the world the less we appreciate its vastness. 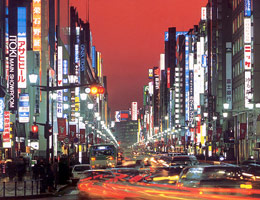 Moreover, it is foreign to the identity and the collective memory of places, which always have existed in local times. With real time the former become interchangeable, which generates a dystopia from which geographical cities and places have been eradicated. In other words, in the Overexposed City, the disappearance of real space runs parallel to the disappearance of local or historical time, or rather the "urbanisation of real space" gives way to "urbanisation in real time," a new form of creating a city based on computing and television logic.

Vladimir Krstic, who lectures at the University of Kyoto, is convinced that the appearance of the Overexposed City is a sign of the future deurbanization of the planet, or at least the disappearance of the city as we know it. According to Krstic, this process is already in motion in Japanese urban space, which is inundated with electronic screens. These cause interruptions to the physical aspect of the cities, electronic holes where an infinite transparency replaces architectural matter. The simulations they generate are interspersed with urban space, eroding its limits and converting it into something permeable that tends to disappear.

The Overexposed City is also characterized by a certain form of architecture, constructed with highly processed materials and finishes that are polished, shiny, reflecting... The key is achieving maximum luminosity. The major protagonists are the membranes, skins that no longer respond to the structural and functional logic of the inside of the building, and which have become simple limits that only assume commitments with the street, or to be more precise with the commercialism that prevails in the Overexposed City. In this way, the shape of the city is no longer generated by architecture; it is now generated by a flow of images in permanent evolution, by "processes on physical shapes," by lines that draw dematerialized profiles to insinuate a city with neither weight nor consistency. This is the Overexposed City, a place where nothing is constant and where everything exists at the same time.

Paul Virilio is a French philosopher and architect who as a teacher is associated with the École Speciale de Architecture of Paris. In 1992 he became part of the High Committee for Housing for the Disadvantaged, and is currently working on the construction of what will be the first Accident Museum.

Virilio identifies himself with the phenomenology of Merleau-Ponty, under whom he studied at the Sorbonne. His theoretical work starts from the idea that humanity has always lived dominated by war, owing to which the logic of the military industry is vital if we are to understand the process of the creation of cities. Throughout history what has guided the world has not been trade and the search for richness, but war and the search for speed. Nowadays information technologies are being implemented in order to achieve similar effects to those of traditional war weapons: "from nuclear war to the information war." Contemporary confrontation in the form of war is played out by means of propaganda, telecommunications, and social control. All of these together induce the demobilization of society.