The construction of Baghdad, which was initiated in 762 by the second Abbasid caliph, Al-Mansur, was a true visual declaration of the ascendance of the Caliphate to coincide with the collapse of the West. The project of the new capital verged on perfection. From the center of its circular storey, 2500 meters in diameter, the palace and the mosque fulfilled the symbolic mission of radiating the political and religious power of the caliph to the four corners of his domains. The new capital was given the name of Madinat al Salam, the city of peace, as homage to the variety of races, tribes, and castes that populated its empire, divided into numerous representations that were distributed in order to populate the model quarters of its perimeter ring. This organization still surprises today because of its rationality and simplicity placed at the service of the paternalistic desire of Al-Mansur to exert panoptic control over his people. 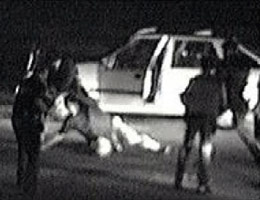 The description that Charles Jencks gives of the 21st century heteropolis subverts the principles of formal cohesion and social order found in Baghdad: politics and religion give way to deregulated economic power as the only force generating the city, the effects of which are only too clear.

This is so in the first place because of the lack of limits and of a center. The metropolitan area of Los Angeles extends over 150 km in an east-west direction and 100 km north-south as a result of a process of territorial depredation that was initiated in the early 20th century and a hundred years later seems to be boundless. In the interior of the chaotic mass, the proliferation of sub-centers by way of strange attractors provides a minimum articulation through a powerful network of highways.

Secondly this is so as a result of the gaping social breaches in the city of the other. If Baghdad had aimed to be a rigorous human zoo, the metropolis of the Pacific has turned out to be a volatile jungle. The force of the attraction exerted by global cities, which become powerful magnets owing to the liberalization of markets, overcomes the resistance set up by governments, despite the armor-plating of their frontiers in the form of fences and walls. It is not for nothing that the heteropolis of Los Angeles has been described as the first city in which paradoxically the majority of the population belongs to racial minorities, which compose a paradoxical and delicate multicultural mosaic that is as exposed to the cyclic fury of the elements (Watts and Rodney King already form part of the repertoire of natural disasters that have desolated the city) as it is trusting in its capacity to reinvent itself and show itself to be so resiliently alive.

Charles Jencks became popular on giving an architectural meaning to the concept of postmodernity in his The Language of Post-Modern Architecture in 1977. His work as a theorist has been accompanied by an intense project activity in the field of landscape, which has determined his scientific and naturalist approach to architecture and the contemporary metropolis.