The use of the term Dual City as a synonym for a late capitalist metropolis is very frequent among city theorists who ideologically come within the neo-Marxist orbit. These thinkers produce social criticism that aims to unmask the capitalist superstructure and denounce urban injustices. This position is becoming more and more important after several decades of globalization, which has generated degrees of social polarization unknown since the end of the Second World War. Saskia Sassen thinks that it is a case of a phenomenon that is intrinsic to the new late capitalist order, where badly paid jobs are the key to economic growth. This makes social decline a complement to development, and not as previously an indication of decadence. 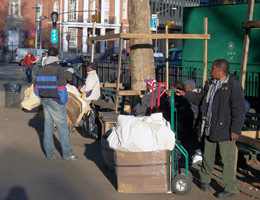 It has been the confluence of two opposing phenomena which has installed the logic of social inequality in the contemporary city. The radical transformation that the labor market has undergone has meant the disappearance of job stability and the consequent increase of subcontracting, informal work, part-time work... and poverty. This labor degradation coincided with the appearance of numerous "nouveaux riches" who were able to take advantage of the opportunities offered by globalization. Social polarization has shot up as a result of the conjunction of both phenomena. If between 1945 and 1975 in the United States nine out of ten salaries were average, today's figure is five out of ten. 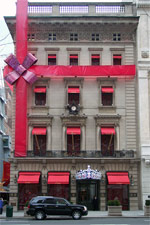 The Dual City has led to the crisis of the traditional social division inherited from the stage of the welfare state and characterized by the ruling of an immense middle class with slight variations upwards and downwards. At the moment the upper class has increased spectacularly with the appearance of the "nouveaux riches," people from all walks of life who have reached the top as a result of very diverse economic activities. Between the upper and the middle class yuppies have created a niche; in cities such as New York or Los Angeles they may represent as much as 30% of the population. They are followed by the middle class, which has been drastically reduced, and the lower class which is experiencing the opposite process. The last step of the flattened social pyramid of the Dual City is made up of the "new poor," former workmen expelled from the work market by the process of deindustrialization and shut away in urban ghettoes where they are trapped owing to their difficulties in achieving access to education and new technologies.

The bipolar essence of the Dual City is reflected in urban space, which neo-Marxist city theorists have identified as an active part of social segregation. The association of highly qualified urban areas with others where an unprecedented physical decadence prevails constitutes the visual expression of the phenomenon of the Dual City.