The principle of the excluded third describes in terms of Aristotelian logic the impossibility of a third conciliatory position existing in the face of two contradictory propositions. There are no half measures. Experience shows that at least one of the two initial premises must be false. In 1965 the lecturer Lofti Zade, from the University of California in Berkeley, introduced in his article Diffused concepts the method that, invalidating this principle, would lead to the so-called diffuse logic for treating inherently imprecise and non-quantifiable concepts, such as "heat" and "cold". In this way a route was opened that would soon show its huge potential to describe certain "smart" technological devices, which is also useful to approach the most indefinite and controversial aspects of the contemporary city. 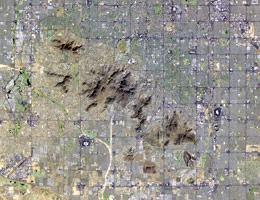 History provides examples of the profoundly unbalancing effects that the introduction of new technologies has on the city. In the same way therefore that the pasteurisation of foods caused the complete productive and commercial reorganization of 19th-century Paris, the consequences of the explosion of Internet and the telecommunication boom in the late 20th century were that the city acquired an unaccustomed diffused appearance. Once markets were liberalized and productive activities delocalized, compromises were imposed on the city and the imprecision worsened. We can thus situate the Yokohama ferry terminal on the thin red line that separates architecture from the landscape and the infrastructure, at the same time as Phoenix is established under wonderfully precarious conditions that do not distinguish between town and country, while the need is shown for thinking of global metropolises such as London or Los Angeles from a purely territorial approach.

The diffused city therefore has blurred outlines. There are neither blacks nor whites, but rather a wide range of greys. In the same way, its characteristics are no longer easily recognizable as its doors have been opened to making the public space and architecture into a show. The diffused city becomes a speculative game of pretences, a kaleidoscope of infinite colour effects in which confusion is not a trap but rather a virtue.