The possibility of colonizing the territory through light city threads has fired the imagination of modernity from its beginnings, as in it the objective of overcoming in exemplary fashion the static logic of human settlements to install a state of transience and constant movement is complied with according to the changeability of modern times. The corridor city of the 21st century is located at the end of a line of clear technological inspiration from which the linear cities of Arturo Soria and Mosej Ginzburg derive, which share the goal of breaking with the hierarchical and oppressive relationship that the Capital City and the Grossstadt established in the field to formulate two extremely sophisticated urban models. 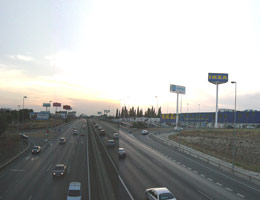 In the late awakening to industrialization in Spain, the railway became the backbone of the winding organism of Arturo Soria, and the steam machine took care of establishing around Madrid a scheme which, in accordance with the ambition of its author, did not hide its potential of extending to infinity. Decades later, and in the creative maelstrom that followed the October Revolution, the plans for territorial electrification of the USSR allowed the imagining of light urban filaments attached to the transport infrastructures, which prefigured in a terrifically real manner the Marxist illusion of the disappearance of cities.

Both projects in their own way, as is well-known, slipped into oblivion. The success of the contemporary corridor city, on the contrary, is based on the abandoning of that collective idealism that inspired linear cities and on the adoption without reservations of a declared pragmatism. The corridor city unfolds through the erratic course of the private car, renouncing completely the questioning of the supremacy of the metropolis over the territory.

Starting from this differential fact, the corridor city goes deeper into the dematerializing tendency of the linear city, and serves us a perpendicular section to its guideline, the freeway, to manifest the final apotheosis of the zero degree of what is urban. While the transversal cut of Soria’s city showed the unviable dispersion of smart Arts & Crafts suburban residences and in that of Ginzburg a room appeared completely out of context raised on pillars in an illusory manner, the corridor city exhibits a picturesque landscape of an exuberance and lightness which its forerunners could not have imagined. On the banks of its rivers of metal sprout masses of aerials and electricity pylons, and forests of advertising posters and national ensigns, which give shade to a varied catalog of faceless riverside settlements. Service stations and drive-throughs, hostess clubs and motels, truck parks and car dealerships serve to introduce the real city and show its transience and precariousness, exhibiting cheekily what the prudish metropolis does not want to see.