The original meaning of the word buffer refers to damping, and its flexible character is maintained in its urban definition which includes the added value of the serious problem of immigration in contemporary cities. In the 1980s, the apartheid regime in South Africa created the urban concept of buffer zones for those areas of generally waste land that served as strips to protect the settlements of the dominant white majority. However, parallel to the official extinction of institutional racism within democracies, the disappearance of obstacles to the free circulation of capital and the lack of freedom of movement of people through frontiers reshapes new urban scenarios that are characterized by exclusion. 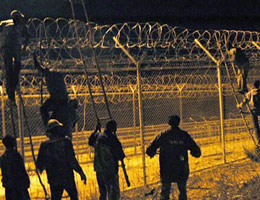 Global buffer cities become spaces of transition between countries and continents, where differences in economic development cause the uncontrollable decanting of people and businesses. The interest of the buffer city lies exclusively in the fact that it is crossed to reach the other side, and this condition of area of passage, where legal exchange and illegal traffic are more intense, gives it a high degree of crossovers and social conflict that become spatially various manifestations of a provisional nature. These include ports of frantic activity and deserted unloading beaches, busy airports and stagnant reception centers, formidable logistic platforms, and endless expanses of tents.

In contrast to this panorama of change, however, the buffer city tends to protect itself by crystallizing its limits. As often occurs to someone who mediates in a dispute without being able to stand aside, the buffer city takes the hardest blows, and its immediate response is fortification. The material shaping of the differences occurs in the form of the construction of impenetrable armored perimeters, whether fences, ditches, or walls, which are silently patrolled and imperceptibly watched over with the aim of dissuading those who hide in the undergrowth as they wait desperately to make their definitive move.