The two main definitions of the term Analogue City come from very different authors and allude to different concepts. Aldo Rossi uses it to vindicate the role that must be played by the collective memory of citizens in the process of the designing of the city, while for Trevor Boddy it is a metaphor of the new contemporary "public space." 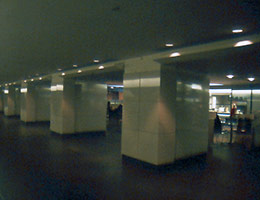 Aldo Rossi proposed it in 1969 as a hypothesis that aimed to synthesize urban analyses and projects. Inspired by the paintings of Canaletto, the Analogue City was a composite procedure with a surrealist base which, starting from certain events of urban reality, served to construct a new reality with an analogical base. It was an alternative way to approach the city that was nearer imagination, intuition, and personal interests than the rational thought which up to then had guided the typological analysis of La Tendenza. This was Rossi’s response to the distortion which the matter of identity introduced into a rational reading of the city. The analogy resorted to correspondences that were only comprehensible within a human group that shared the same cultural base, the same collective memory. The knowledge provided by the typological analysis was to be complemented with the separable informative flow of the collective memory of cities. 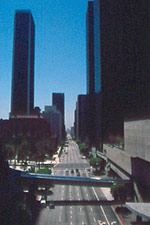 The second definition of the term Analogue City is given by Trevor Boddy and his analysis of the phenomenon of the overhead and underground pedestrian connections that began to proliferate in North American cities in the 1980s. According to this author, this collection of walkways and tunnels connecting hotels with railway stations, office blocks with shopping centers, subway stops with leisure centers... allowed "well-to-do citizens" to move about urban centers without the need to use its streets and squares, i.e. the traditional public space. Initially this network of artificial streets installed in cities such as Minneapolis, Calgary, Houston, and Montreal was justified as a response to the inclemency of the weather. Time has however shown that their proliferation is a result of contemporary society’s obsession with security. What the tunnels and bridges of this type of Analogue City have allowed is the extending to public spaces of the use of control systems used in private spaces. Thanks to security services who filter the entry of undesirables, these pedestrian networks protect the middle class from the poverty, delinquency, and marginality that inundate the true public space of urban centers.

Aldo Rossi (1931-1997) was the leader of La Tendenza, a group of Milanese architects who in the early 1960s began to lay the foundations on which would be built the most influential urban thought of the last third of the 20th century in Europe. Their point of reference was the Marxist revisionism of Gramsci and his attempt to construct a new left-wing culture. In order to incorporate architecture and urbanism to this project, La Tendenza proposed the need for relaunching them as independent disciplines. This was the origin of the rethinking of the city from strictly disciplinary terms, a task that would be tackled by transferring structuralist thought to it. Aldo Rossi was the director of the magazine Casabella (1958-1964), a teacher at the Istituto Universitario di Architettura in Venice and the Milan Polytechnic, and the author of architectural works as emblematic as the Cemetery of Modena (1971) and the Gallaratese Building (Milan, XXXX). In 1989 he was awarded the Pritzker prize for architecture.

Trevor Boddy is a Canadian architect who writes as an architectural critic for The Vancouver Sun. He has lectured at the universities of Oregon, Toronto, Manitoba, and British Columbia, and has also worked as a town-planning adviser in the cities of Calgary and Edmonton.