Thomas More (1477-1535) introduced utopia to the western imagination in 1516 by means of a play on words halfway between outopos (non-place) and eutopos (good place). This refers to a perfect place, like nowhere in this world, which consists of two essential concepts. The first is isolation. More describes the extraordinary technological effort of Utopus, the mythical creator of Utopia, to eliminate the fifteen miles of land that joined the peninsula of Abraxas to the continent, thus laying the foundations to his island. This is a non-place, outopos, which is delimited by the sea; this geographical peculiarity is combined in the second place with the elimination of differences, in which the answer to all conflicts can be located. An overwhelming social homogeneity is transferable to the form of the city: "Anyone who knows one of the cities will know them all, as they are all the same as far as the conditions of the terrain allow." 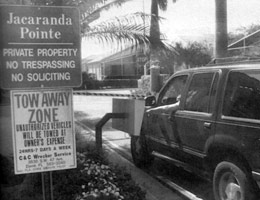 To define the contemporary privatopia we must move to the United States of America, in a socioeconomic context characterized by the disappearance of the welfare state in the jaws of rampant late capitalism, and the ruin of the political panorama after the assassination of Kennedy in 1963 and the Watergate scandal that came to light a decade later. Privatopia arose in the North American literature to designate any exclusive urban development segregated from the public domain. In contrast to the wards of Jefferson, republics in miniature in which the architect-president laid the foundations of his nation in the 18th century, the principle of political cohesion withdrew hastily in the last three decades of the 20th century.

The economic deregulation of late capitalism provoked the collapse of what is public, to which privatopias offer an extremely effective remedy, which is based on the sublimation of life in a community, defended among others by Robert Park and John Dewey against the industrial metropolis. Privatopias offer above all protection, and after the manner of Utopus they manage to separate what is dystopian by the establishing of clearly defined limits: Armor-plated perimeters that exclude beastliness and protect bestliness.

After this, privatopias used the subterfuge of social peace to guarantee a tight rein on individuality by means of standards of behavior that are formal, objective, and easily understandable, and are established as simple clauses in the sales contracts of the homes. In effect, the equality that More sought is finally attained through the triumph of introspection. The price to pay has been fully assumed: Fear and exclusion are free.

Ewan McKenzie is a lecturer in political science at the University of Illinois in Chicago. As an expert on the Constitution of the United States and on civil liberties, McKenzie specializes in the study of Homeowners Associations, the dissemination of which has been unstoppable in the United States during the last quarter of the 20th century.