Metapolis is the name given to those urban phenomena which, going beyond the metropolitan scale, free themselves from any territorial medium to base themselves on interconnection networks composed of visible means of transport and invisible means of communication. Under the denomination of metapolis, urban attributes are acquired by all those spaces which, whether they belong to the city or not, comply with the condition of taxing its resources, work forces, and habitat to the metropolis by guaranteeing its daily functioning. 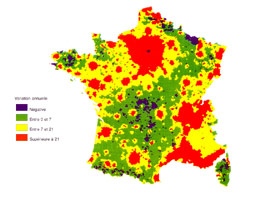 Lacking a physical substrate, and as a consequence of the absolute leading role played within it by flow and movement, the form of the metapolis differs radically from that we knew of the metropolis. This is so in the first place because of the lack of contiguity between the fragments that make it up, which makes it a palimpsest of distant cities, remote productive areas, and exotic leisure resorts converted into decision centers: profoundly heterogeneous spaces, organized according to a criterion of maximum efficiency which determines that fluidity in transitions becomes as important as the sharpness of the parts.

Secondly this is because of the disappearance of stable and balanced territorial organizations such as those that were tested by the pioneers of modern urbanism. The metapolis is constituted as a polarized system of interconnected global metropolises thanks to the proliferation of high-speed means of transport. The consequences of this acceleration are profound: the appearance of the so-called "tunnel effect" among nodes means the end of the phenomenon of transversality that throughout history has served as a basis for the "natural" organization of the territory.

An intermediate position, which historically could have been the key to prosperity of average-sized and smaller cities, becomes by means of metapolization an insuperable disadvantage that causes the exodus of the population, economic activities, and wealth to the large cities. For the metapolis, between two high-speed train stops, between two airports, there is nothing, only landscapes tasting of dried fruit and nuts and gin and tonic, contemplated by vacant and indifferent glances from hermetic windows from those who wonder when they will arrive.

François Ascher is a sociologist who lectures at the French Institute of Urbanism at the University Paris VIII, at which he directs the "Urban mutations and the governing of territory" Department of Studies. From a sociological perspective, Ascher studies the effects of mobility on the generation of new forms of urban life and on the new urban spaces that house them. Ascher's position is in contrast to that of theorists such as Choay and Webber, who defend a discontinuous reading of the history of the city around the post-urban concept, assessing on the contrary the condition of a goal as the natural evolution of an extremely intense stage of civilization.