Since his Delirious New York, Rem Koolhaas has been demonstrating the many sides of his surfer metaphor both to describe the architecture of Manhattan and to refer to its intellectual positioning as regarding the production of architecture. Even so, it was a big surprise when in 1994, using his S, M, L, XL as a rough guide, the Dutchman showed his skill and cynicism against the unproductive attitude of resistance to the metropolis of Lewis Mumford and Leon Krier, achieving an ephemeral and brilliant raid on the furious and uncontrollable wave of contemporary urbanism. Koolhaas knows the city, he is not questioning it. He interprets it, but does not create it. He mounts it at the same time as he definitively renounces the idea of driving it. 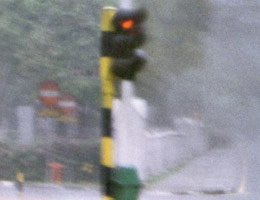 Koolhaas runs his eye over the surface of the contemporary metropolis, which in former times represented the peak of the evolution of the zoon politikon, and which as from the last quarter of the 20th century has been reduced to the cracked epidermis of the wasteland of underdevelopment. The generic city, exported through instantaneous communications, knowledge, and culture, is the efficient and pragmatic product that arises from the remains of what was once the city, purging itself to a minimum. Koolhaas's freestyle movement, however, is paradoxically anchored to the North American city, about which he is extremely knowledgeable and which he greatly admires. It is powerful and precarious, fragile and flexible, the new and decadent mother of the process of globalization by means of which the empire devises its indisputable supremacy.

This reference determines that at the end of his travels Koolhaas returns to the uncertainty that he takes as a starting point. After an indifferent landing at the airports of the generic city, and the crossing with an improbable balance of the fluidity of its statistics, the mass of its population, the senselessness of its urbanism, the disappearance of its policies, the complexity of its sociology, the anonymity of its quarters, the banality of its architecture, the incommensurability of its geography, the contradictions of its identity, the oblivion of its history, the power of its infrastructures, and its lack of culture, the lapidary "The city is no longer. We can leave the theater now" is the conclusion to twenty-five subliminal pages of text illustrated with blurred photographs. Koolhaas reveals the open secret that was circulating more and more insistently after the apotheosis of the ¥€$: that the city no longer exists, that the city is indifferent, unsubstantial, and inane, out of reach of characterization. In short, without any bitterness, the city doesn’t matter.

Rem Koolhaas founded the Office for Metropolitan Architecture (OMA) in 1975 together with Zoe Zenghelis and Madelon Vriesendorp. A graduate of the London Architectural Association, in 1978 he published Delirious New York, a Retroactive Manifesto for Manhattan. Published in 1995, his S, M, L, XL commented on the work of the OMA and established revealing connections between contemporary society and architecture. He is currently the director of the OMA and the AMO, the conceptual branch of the OMA that concentrates on the social, economic, and technological changes of the present and on the exploration of territories beyond what is urban and what is architecture. Rem Koolhaas is a lecturer at the Harvard University, where he leads the "Project on the City" research workshop.