With this term Fantasy City John Hannigan aims to reveal the economic logic that hides behind the show city, that dazzling universe of lights and colors into which leisure, culture, and consumption are converting in the contemporary city. The Fantasy City burst onto the scene in the 1980s, when the unstoppable growth that the leisure industry was experiencing in cities became apparent. Sociologists put it down to the so-called generation X reaching maturity, the middle-class children born during the baby boom of the 1960s who had grown up unaffected by the difficulties of the post-war period. This generation, which had come to include leisure in its daily activities, demanded sophisticated forms of urban entertainment that were characterized by the effect of thematization. 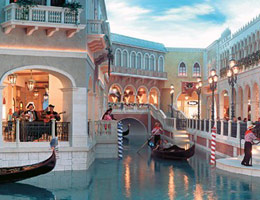 The process of the financing and the construction of the Fantasy City was carried out by five players: the credit corporations, the property promoters, the leisure multinationals (with Disney, Universal, and Sony at the forefront), the retail sales operators (who sell or rent space to minor entities), and public bodies, who place at the disposal of all the former generous amounts of public money. The excuse is that this type of investment revitalizes the economy of degraded areas. 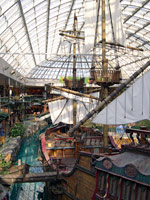 Hannigan notes three strategies as keys to the Fantasy City: rationalization (which alludes to the pragmatism that characterizes the management and operation of leisure centers and those of contemporary business), the use of synergies (taking advantage of neighboring activities), and thematization, a phenomenon that has attracted Anglo-Saxon urban criticism in recent decades.

In effect theme parks are one of the most spectacular expressions of contemporary leisure. The huge success of the formula inaugurated by Walt Disney in 1954 with the Disneyland of Anaheim in Los Angeles meant that his strategy - thematizing an enclosure and placing the most advanced technologies at the service of simulation - was extrapolated to spaces for culture, consumption, and even urban form. For all of these Disneyland became an inevitable point of reference.

The thematization of leisure has even extended to the subject of food. John Hannigan refers to the activities carried out in latest-generation restaurants as "eatertainment," in which eating is beginning to come second to entertainment. Examples of this include theme restaurants (the Hard Rock Café, Planet Hollywood, the Fashion Café, etc.), which offer a combination of entertainment, food, souvenir shops, museums... Gambling has also become a thematic leisure activity. The casinos of Las Vegas are becoming "disneylandified" in leaps and bounds, as is shown by the latest generation of buildings constructed for the purpose: New York, New York (which reproduces the most emblematic skyscrapers of Manhattan), Paris (which has an Eiffel Tower and an opera building) or The Venetian (where one can take a trip in a gondola through the canals of Venice).

But the main protagonist of the Fantasy City is consumption. The generation X consumer is a hedonist with high purchasing power who looks for entertainment in each of the activities in which he participates in his more and more extensive free time. This is why simulation techniques are becoming ever more refined and operate also in shopping centers. Consumption is favored with the omnipresent strategies of the theme park: this is what John Hannigan has called ShopEntertainment. In this case the matter of the synergies is particularly important; this is inducing a spectacular change of scale in the consumption spaces of the Fantasy City. This tendency is reflected in the megamalls, shopping centers which combine with other "activity generators" (convention halls, stadiums, casinos, museums, etc.) to generate urban units on a territorial scale that take several days to visit.

John Hannigan is a lecturer in sociology at the University of Toronto. His studies as a sociologist have concentrated on the role of the leisure industry in the postmodern city.