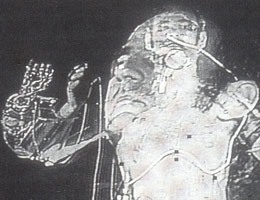 The term cyberspace first appeared in 1984, when the North American writer William Gibson published his novel Neuromancer. Cyberspace was then defined as something intermediate between virtual reality and Internet, like a parallel universe to the real one but governed by other rules. Some authors understand that the virtual dimension of cyberspace will lead to a rupture with the Newtonian notion of space, according to which perspective, which sets the observer at a certain point, will give way to a kind of cubist vision where everything will occur at the same time in multiple form and from various viewpoints. Other authors, however, believe that the physical and metaphysical logic of real space will continue to be valid in cyberspace. 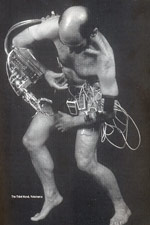 When he exists, the cybernaut will be a half digital half organic being connected to a computer in a multisensorial way. In order to do this it will be necessary to implant electronic appliances in his eyes, hands, arms, legs, head... until all the exchange nodes between his body and the exterior become points that can be plugged in. The appearance of the cybernaut will therefore only be possible if one day biotechnology, with the help of nanotechnologies, manages to supplement the human body by introducing electronic microappliances into it to increase its capacities. The cybernaut may then transcend his own body, going beyond the barriers that currently separate the computer from the user and immersing himself in cyberspace so as to experience it directly.

In urban Anglo-Saxon theory the Cybercity debate is polarized into two opposing trends: on the one hand that of the technophiles, who describe the Cybercity as a space of freedom, democracy, connection, equality, and individualism that can put an end to the problems of the traditional city, and on the other hand that of the technophobes, who understand that the Cybercity is a space of control, segregation, fragmentation, polarization, and isolation that can finish off the traditional city.