The term cannibal, which is generally used to describe an organism that feeds on the meat of individuals of its own species, retains this meaning when it is associated with a city. We understand such a city to be one that in the process of its territorial expansion and growth engulfs any other urban area that it encounters. This is an organicist characterization of the city, which resorts to the analogy with natural phenomena to reveal the most irrational facet of its behaviour. Cannibalism becomes a valid reference for situations in which the expansion of the city is subject to the vicissitudes of the free market and the changing interests that encourage property speculation, which raise doubts about the efficiency of any regulation, norm, or form of planning. 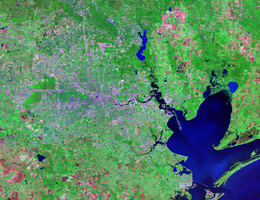 A contradiction of the cannibal city lies in the fact that the assimilation of the organisms that it ingests is slow and laborious, while its voracious appetite gives it no time even to chew. If the delicate coherence that Olmsted attained in order to relate his urban projects to the city was inspired by the transplant technique developed by 19th-century science, the cannibal city with its primitive mentality trusts that the ingestion of the organs of the donor will have a repairing effect. The recession of the public function causes serious imbalances in the efficiency of the infrastructures, the professional attitude of the police and the quality of the urban installations, which are entrusted to uncoordinated administrative bodies whose response capacities depend exclusively on the purchasing power of the inhabitants who finance them.

There is no doubt that in the maelstrom of its growth the impetuous character of the cannibal city prevents the appreciation of the true symptoms of the ailments caused by the logical discomfort of heavy digestion. A faulty diagnosis inevitably leads to complications that are difficult to resolve.

Mike Davis is currently one of the most respected voices in the contemporary debate on cities in the United States. He is the author of numerous works that interpret the city of Los Angeles from a bitterly critical perspective that has won him an undeserved reputation as the enfant terrible of the North American stage. A promoter of the recrudescence of the negative visions of the metropolis in the late 20th century, his vision follows the sociological thread of the critical current that Georg Simmel inaugurated in Berlin in the early 20th century and which the School of Chicago continued in the American city.