The place of the car within society, the utopia of mobility, and the term Autopia are irremissibly linked to the city of Los Angeles. Its origin takes us back to the ineffable Walt Disney, who in his visionary paternalism gave this name to one of the most popular attractions of Disneyland on its inauguration on 17 July 1955. Sponsored by the Richfield Oil company, the original Autopia shaped the modern ideals of the social conductivism of its creator. Miniature cars on rails moved in an orderly and civil manner through a small controlled world, in choreography similar to that orchestrated in the corrosive and delicious opening scenes of My Uncle by Jacques Tati (1958). 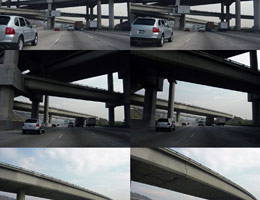 The image of Tati was however one more manifestation of the generalized breakdown of faith in modernity, in its mathematical and implacable rigidity. This was the crisis that in the 1950s would lead to the criticism of the first International Congresses on Modern Art (ICMAs). With the studies of Alison and Peter Smithson in Berlin, Kahn in Philadelphia, and Candilis in Toulouse-le-Mirail, the coherent and monolithic happy world of Disney and Le Corbusier began to disintegrate, crushed beneath the wheels of the car which the welfare state had immediately converted into a social conquest that cannot be eschewed. 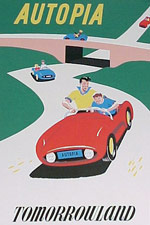 With this background, Reyner Banham redefined the term in 1971 in his Los Angeles. The Architecture of Four Ecologies. Autopia appears as the fourth ecology of the mysticism of the American megalopolis, described through the fine metaphor of the girl touching up her makeup on negotiating an exit ramp. Banham thus clearly marked the distances between the democratic condition of the flow and the totalitarianism of the traffic, revealing a new liberating freedom where movement ceases to occupy the secondary role that the Athens Charter had reserved for it, in order to go on to become the absolute protagonist of the contemporary metropolis.

According to Banham, the experience of driving on the freeway gave the people of Los Angeles a special state of awareness. In the Los Angeles of the early 1970s, there were no rules for navigating. The intensification of concentration in order to make one’s way through an overwhelming, organic, and chaotic flow becomes an equally intensified perception of freedom, which for Banham is the ideal vision of democratic mobility: the efficient, rapid, and pragmatic conjunction of the private car and the public freeway.

With the advent of Autopia a transcendental change in roles can be seen. The formerly anodyne car becomes a literary topic, a habitable place, customized to offer the city dweller, according to Banham, the two calmest and most comforting hours of his daily life. The air conditioning converts it into a domestic space, the radio makes it a place of leisure, and the cell phone reveals it to be an unusual work space. The delocalizing effects of this progressive technological supply are immediate, and the city that was compact and uniform jumps out of scale and becomes a territory. It depersonalizes itself and deregulates itself, and offers itself as a new landscape; figuratively and literally it comes close to the jungle for which Herbert Spencer formulated in the mid-19th century the law of the survival of the fittest. Latest-generation all-terrain vehicles incorporate at the same time the most basic and the most sophisticated equipment in order to decipher it. We are referring not to what is local but to the balloon, compass, or GPS which are the only guides for a second kind of nature furrowed by rivers of metal.

Reyner Banham (1922-88) was one of the most influential critics of architecture, design, and popular culture from the 1950s to the 1980s. An engineer and historian by training, he was convinced that technology made society not only more exuberant, but above all more open and democratic.

His combination of academic rigor and sensitivity to the spontaneity of early pop set him against those who defended orthodox modernity, but placed him in a privileged position to understand the cultural implications of social and political change after the war. His first book, Theory and Design in the First Machine Age, is considered a key work for the overcoming of the Modern Movement in the 1960s. His Los Angeles. The Architecture of Four Ecologies is considered a work of reference for the understanding of the contemporary Californian megalopolis. According to the author himself, it is a book that could only be written after learning to drive, and can only be appreciated by drivers.